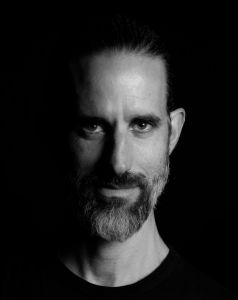 Rayven is a guide in conscious exploration of self though intimacy, sexuality and relationship. He facilitates personal and couple session work, workshops and retreats, difficult conversations and conscious dance and sound experiences.

Rayven began exploring, theoretically and experientially, different expressions of sexuality and relationship towards the beginning of this millennium.

It was initiated in part by a series of courses called the Harlequin Experience, facilitated by Christopher Neville, which provided a foundation in mind-training for developing self-awareness and personal-power.

He trained for two years in an embodied counseling modality with Yehuda Tagar of Persephone Institute, a form of process work based on Rudolph Steiner’s anthroposophical approach to personal development, integrating spiritual awareness, body consciousness, innate inner-wisdom and self-healing.

With further training, practice and guidance from Dr Shakti Malan, he began supporting others through sessions, workshops, retreats and conscious dance experiences.

Rayven has participated in workshops and retreats with a number of practitioners including Jonti Searll (of Tantra Evolution), Rahasya (of the Advait Tantra School), Ma Anand Leandra (of Durga Tantra School), Andrew Barnes (of Awakening Within Foundation) and The International School of Temple Arts (ISTA).

Wisdom and practices are drawn on from spiritual/shamanistic/esoteric/mystery traditions such as Lojong, Mexican Toltec and Eastern Tantric teachings in support of a conscious exploration of intimacy, sexuality and relationship.

“The Raven is always a magical creature able to take the form of human, animal, even inanimate objects. He is a keeper of secrets, and a trickster…” – from Wikipedia

Raven is an archetypal energy employed in this exploration, along with Wolf, and universal masculine and feminine principles.

“Tricksters […] violate principles of social and natural order, playfully disrupting normal life and then re-establishing it on a new basis.” – from Hotfoots of the Gods by PAUL MATTICK

Where Raven is creative and playful, Wolf represents raw, untamed, primal energy, an intelligence rooted in the senses and instinct, holds a contrast between nurturing/protective and fierce, and encompasses warrior qualities of stealth and patience.