The Reality of Lies

Announcing something to share, rather than simply sharing it, holds a certain charge – a confusing edge of anticipation. At least the suggestion that one ought to be sitting to receive a piece of information hints that it will be challenging to receive.

The vagueness of something is spiced with uncertainty. Is it a good something or a bad something? Should I prepare myself for shock, disappointment or relief?

Blurting out a blow with no chance to brace could be considered callous. Yet, being gifted that moment to compose myself feels remarkably like being robbed of a natural response. I can’t help wondering just exactly for whose benefit that is.

My attention is being called. I’ve just arrived back from a fantastic week-long holiday by the coast with my family. But my elation and positive energy is being disappointingly drained and replaced with cancerous resentment.

Okay, let me be alert, receptive and embracing to whatever this something is. My body squares to face her. Posture open, I take a brief moment while closing my eyes, breathing out slowly after a deep inhale and allowing my body to fully relax. I can do this.

I open my eyes to receive her words.

Lamia is characteristically restless. Fidgeting. Casting sideways glances with her anime eyes. Her expression flickered like a badly tuned television showing amusement one second and awkwardness the next.

This is typical. She seldom slept more than an hour or two at a time. I’d see or hear from her for no more than 5 – 15 min at a time, albeit 10 to 20 times each day. Never settled, she’d flit from one thing to the next.

You get the idea?

“While you were gone, ” she begins…

I don’t believe she is particularly happy I’d been away on a holiday and she hadn’t been able to join. But let’s leave that one alone.

“While you were gone, Rogan came over. I needed company and you weren’t here. We fucked.”

She may have added “Here, on your bed.” but by this stage I don’t really know what she is saying. There’s something about the simultaneous feeling of being concussed and winded, when in actual fact you’ve not been physically touched in any way whatsoever.

For a moment time stops. The brightness and contrast of my vision amps to max. Sound warps down a spiraling tunnel of mirrors. Thoughts and feelings surge through the strangled tubes of my blood stream. My body silently gasps and freezes, contracted in mute agony.

A part of me that split off to watch the fireworks begins to reason. I desperately want to be cool and unaffected. I am not going to let this happen to me a again.

While at a party years earlier, in an entirely compromised state, I’d rounded a corner to witness my then girlfriend enthusiastically making out deep down her ex-boyfriend throat. I was an immature, largely insecure 19-year old and days earlier we’d forgone our virginity together. It took me many years to recover.

It is not going to happen again. With all the pain and anger sucked into my tender solar-plexus, I settle into a mode of protection and self preservation.

There’s a pause as she measured the moment, assessing the situation with quizzical eyes that dart rapidly over every nuanced surface of my expression.

As a teenager I’d enjoyed reading (and rereading) Astrix and was generally amused by the in-tribe fights that regularly broke out in the village, typically involving the abuse of fish. Well, what happened next was a fresh, fat salmon landing with a resoundingly wet slap across my flushed cheek.

With a burst of contemptuous laughter Lamia rang out “Ha, I’m just kidding. It didn’t happen. I just wanted to see how you’d react!”.

She grinned at me. Challenging. Daring me to respond with anything other than a sense of good humor.

It was that cartoon moment when the freight train hits! Your insides momentarily pop out into gravity-free space before you realise the rest of you is hurtling in the opposite direction.

I literally had to locate my senses.

Meanwhile, somewhere in an upper corner of the room, is that split part of myself still quietly observing with a curious detachment. Let’s call him Roy.

Roy was my imaginary alter ego in a time when ‘preadolescent’ was a big, nonsensical word and I had no notion of the concept of ego, alter or otherwise. He was a teen-version of myself, independent, confident and self-assured. Compassionate and kind, Roy would help the young and the weak. He was a hero.

Roy observed my state of being being rapidly displaced, much like a squash ball in a good game while, for all practical purposes, the material world that surrounded me had not changed at all. Not a bit.

Back in school one year we’d received George Orwell’s 1984 as a set work. That history could be rewritten to suit the present native as substantiation of it’s truth had left a marker in my brain.

I had received and responded to the first piece of information as truth. Then in the next instant it was negated. I was being asked to disregard all prior truths and replace it with the new truth.

The visceral response in my being still sounded: the shock, the hurt, the anger. Add now confusion and doubt. If one version of truth could prove so flimsy and insubstantial why should another version be any different. In this moment I was at the mercy of whatever I was being told.

Two opposite truths, both equally believable and unbelievable. Knowing I could not know either way I chose to believe the one that was easiest and put it out of my mind.

Some months later in a moment of alcohol-supported catharsis Rogan brought it up.

“But I though she told you?” he offered, slightly bewildered.

I couldn’t deny that she had as the acid of regurgitated festered feelings scorched my heart and I was reminded of how flimsy and fragile reality can be. 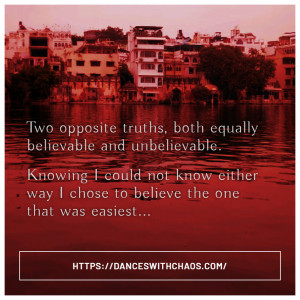 Made with WordPress, powered by Amibe
Envelope Linkedin-in Twitter Facebook-f